The prospect of death separates the terminally ambitious members of our species into two distinct groups: those who compose a bucket list of offbeat things to do before they croak and those who decide to attempt one final grand feat, a last hurrah. Bucketeers climb mountains and visit the Taj Mahal. Last-hurrah types try their hand at writing a symphony or building a school in some far-flung place—or, if their life-long occupation has been in the larceny trade, uniting a few fellow felons to pull off a really big heist.

In “The Last Job,” Dan Bilefsky takes up the 2015 Hatton Garden Safe Deposit heist, an operation at the heart of London’s jewelry district that netted about $20 million in gold, gems and cash. The theft was stunning not only for the size of the take but for the crew that did the thieving: a collection of geezers whose lust for loot was matched by age-related maladies such as heart disease, diabetes and a tendency to fall asleep on the job. Theirs is a somewhat inspiring story, unless your money happened to end up in their grasping old mitts. 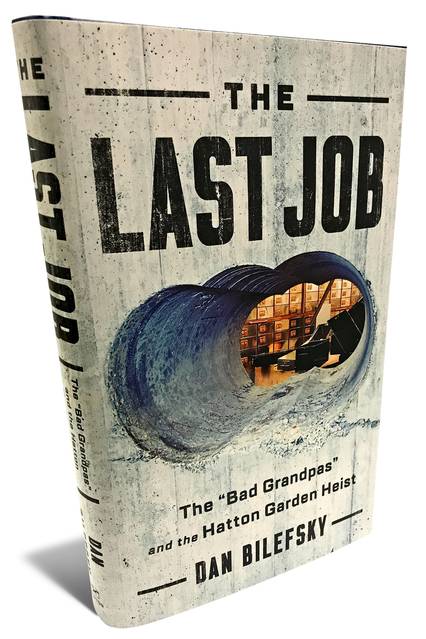 The perpetrators, who called themselves “The Firm,” had long careers as thieves, with impressive incarceration résumés. Brian Reader, the mastermind and 76 at the time of the crime, began his career at age 11 by stealing a can of fruit. He spent years in the jug and suffered from migraines blamed on falling from a roof during a robbery. He was selling used cars in his driveway when he decided it was time for some legacy looting.

Danny Jones, 60, was a lifelong lock-picker and burglar, as well as an exercise fanatic and eccentric. He sometimes slept in his mother-in-law’s dressing gown—plus a fez—and believed he could communicate with dogs. Less flamboyant were Kenny Collins, 74, an old jailmate of Reader’s whose criminal bona fides included breaking into a shoe shop early in his career (a source of professional ridicule), and Terry Perkins, 67, a serious diabetic with his own lengthy rap sheet and a fondness for Margaret Thatcher.Carl Wood, 58, was a second-tier participant, joined by several ancillaries and a mysterious man named Basil who knew how to disable alarm systems.

Mr. Bilefsky, a New York Times reporter who came across the story during a stint at the paper’s London bureau, maintains a generous attitude toward the perps, who were part of a “nearly extinct generation of old-school professional thieves”; they “abhorred violence” and did prison time “without complaint.” He gives them good marks for planning, too, starting with the strike date: Easter weekend, which even the most devoted followers of Mammon consider a good excuse for knocking off a few extra days. The target was legendary. Hatton Garden had served as a setting in Ian Fleming’s Bond novel “Diamonds Are Forever” and Dickens’s “Oliver Twist.” While the Safe Deposit building wasn’t quite Fort Knox, its basement vault was protected by 20 inches of reinforced-concrete walls. Many of the local jewelry stores considered it a safe haven—surely not susceptible to forced entry by elderly eels.

Yet if the planning was solid, the execution was sketchy. Reader rode a bus to the job (his pass would later be traced), while Collins drove his white Mercedes, apparently unconcerned that London is teeming with surveillance cameras. Collins was also somewhat slack as a lookout man, going out for fish and chips and eventually nodding off. When a ramming tool fell apart and forced the thieves to exit the job site to buy a new one, Reader and Wood—apparently suffering from stamina deficit disorder—went home.

“It is almost as if these guys have been locked up and then transported by a time machine to modern times to perform this crime,” a local expert told Mr. Bilefsky, who calls the caper an analogue crime performed in a digital age. Yet the re-tooled rogues did complete the mission—a work of artistry, by their lights, rivaling the Sistine ceiling.

Not everyone was impressed. Scotland Yard’s Paul Johnson, who grew up watching “Hill Street Blues” and who had a lot of experience nabbing jewel thieves, was put in charge of the case. Unlike the Firm, the lawmen operated on the sunny side of the digital divide. Surveillance video revealed the Mercedes, and soon listening devices were recording the perps performing another amazing feat: hanging themselves with their own tongues.

Mr. Bilefsky spices his well-told tale with snippets from the surveillance transcripts: countless F-bombs and petty sniping, often against a backdrop of thunderous music (Neil Diamond was a favorite). Within two months of the robbery, the cops pounced.

The wind-down was bittersweet. New-found celebrity balmed the sting of incarceration—tabloids tagged the crew the Bad Grandpas—yet the evidence against the core four was so overwhelming that all pleaded guilty in March 2016 and got seven years.

So what do old guys do in prison? One of the ancillaries whiled away the hours arguing with Islamic radicals (using Christopher Hitchens’s “God Is Not Great” as a foundational text). The sentence of Perkins, the diabetic, was commuted by the Grim Reaper on Feb. 4, 2018. Reader was visited by the stroke fairy, survived and was released in July 2018.

Other indignities had to be endured, few greater than a trio of tomato-magnet movies based on the crime (one, “King of Thieves,” starring Michael Caine). Mr. Bilefsky suggests that Brian Reader’s “mastermind” status was well-deserved. More than half the loot from the heist is still unaccounted for. One assumes that Reader has never sold another used car, and if he decides he’d like to visit the Taj Mahal, he’ll fly first class.