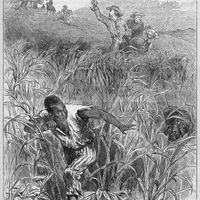 From the recording For A Man Named Tom

This solo acoustic guitar piece is in memory of a runaway slave named Tom. The advertisement below ran in the Virginia Gazette on January 14, 1795, offering ten pounds reward for his capture. In this musical retelling of his story, Tom escapes.


TEN POUNDS REWARD. RAN-AWAY from Bartholomew Stovall's, in the county of Powhatan, the 10th of August, TOM, a stout well set Negro fellow, of a very black complexion, about 25 or 26 years old, 5 feet 4 or 5 inches high, has a scar on his head, and a large one on one of his legs, and one on each wrist, ocassioned by handcuffs: his back much scarred by whipping; was raised by Coleman Brown, of Loudon county, passed through many hands, and was brought from thence by Peter Perkins.--He has a wife in the county of Prince William, the property of Joseph Asbury; it is therefore probable he will make that way. He is a notorious runaway, and lay some time in Dumfries jail in the summer of 1793.--Had on when he eloped, a felt hat, plains coat, and hempen rolls trowsers--Whoever takes up and secures the above run-away, and brings him to the above mentioned Stovall's, about 30 miles above Richmond, on James river, shall receive the above reward; or Fifty Shillings if secured in jail so that I get him again. JOHN ALLOWAY STRANGE. Buckingham County.